In two articles1,2 that appeared last year in the journals Proceedings of the National Academy of Science and Journal of Comparative Neurology, Cyndi Schumann and her colleagues reported that the brain of individuals with autism spectrum disorder (ASD) shows microscopic changes in the number and structure of neurons located in the amygdala, a brain region involved in processing social and emotional information.

Schumann, who directs Autism BrainNet Sacramento node and the Bears Tissue Program at the UC Davis Mind Institute, has long been interested in the anatomy and function of the amygdala and its potential role in autism pathophysiology.

Previous research that she and others conducted using imaging techniques of the living brain revealed that children with autism have a larger amygdala than typically developing children3 and suggested the possibility that changes in the size of this structure may be associated with the severity of ASD symptoms.4,5,6 Interestingly, these studies also highlighted that the growth trajectory of the amygdala from childhood through adulthood was different in individuals with ASD.

While describing overall brain structure, these studies lacked the fine resolution to identify changes at the level of individual brain cells, such as neurons. To fill this gap, Schumann and her colleagues used postmortem brain tissue and examined characteristics of amygdala neurons in individuals with and without autism. Amygdala tissue samples were obtained from Autism BrainNet, the NIH NeuroBioBank at the University of Maryland Brain and Tissue Bank, and the Harvard Brain Tissue Resource Center. 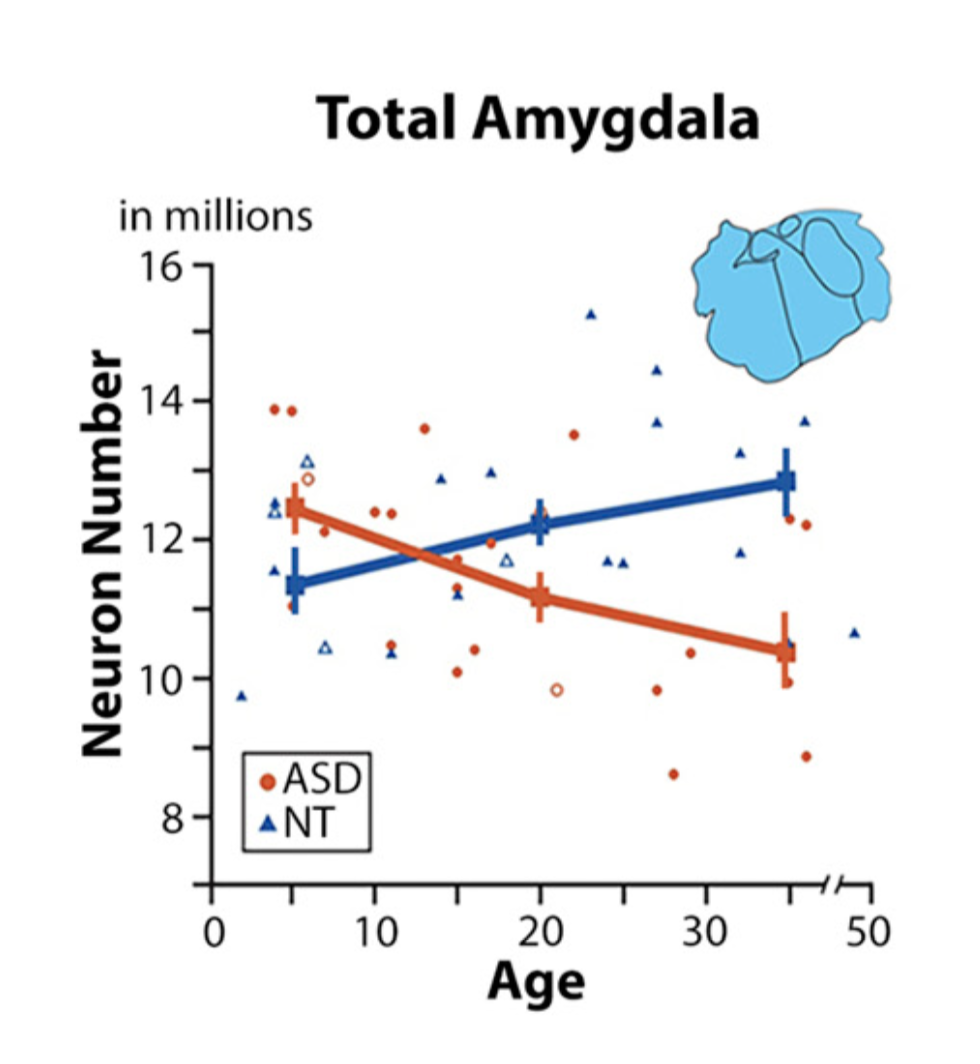 Findings from this research showed that the number of neurons in the amygdala was higher in children with ASD than in children without ASD. Furthermore, Schumann and her collaborators reported that the number of amygdala neurons increased through development in typical individuals but decreased into adulthood in the brains of individuals with autism (Figure 1). Thomas Avino, the lead author of the study, discussed these results and speculated on underlying mechanisms in an Autism BrainNet webinar.

Next, Schumann’s team moved on to examine the structure of amygdala neurons, by focusing on one subdivision of the amygdala called the ‘lateral nucleus.’ The authors microscopically traced many neurons in this region, measured several aspects of their structure and concluded that the only feature that set individuals with and without ASD apart was the number of ‘spines’ dotting neuronal processes (Figure 2). 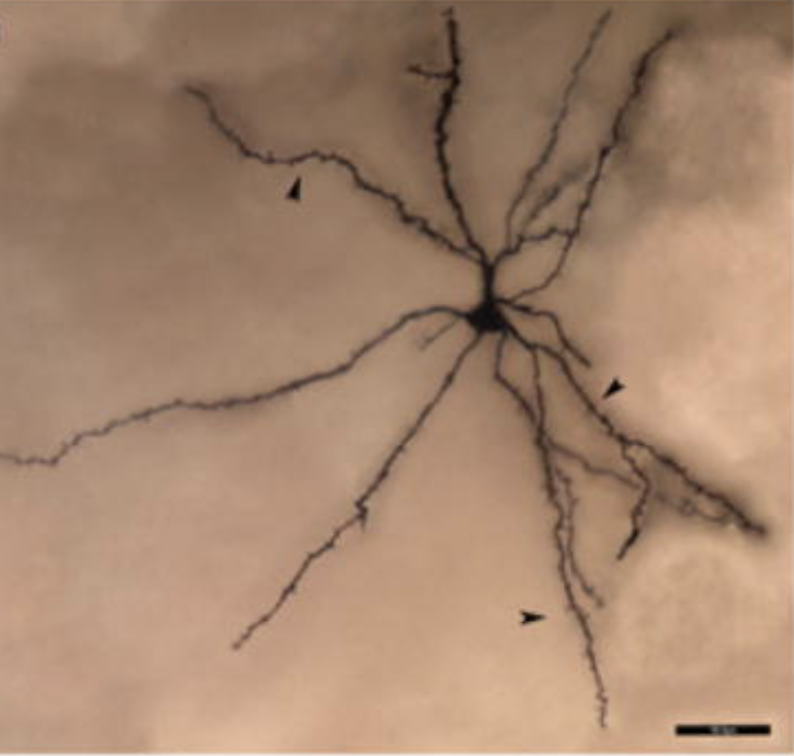 Figure 2. A neuron in the amygdala. Image illustrates the structure of a neuron in the lateral nucleus, a subregion of the amygdala, showing a cell body with long processes extending toward other neurons. Arrows indicate ‘spines,’ small structures dotting the neuron processes, where signals between neurons are exchanged. Image from Weir R.K. et al.2

Spines are important components of neurons, as they provide the sites where messages between neurons are exchanged. Thus, the number of spines per length of neuronal process, or spine density, may provide a proxy to understand how neurons talk to each other. In the study, Schumann and her colleagues found that spine density was higher in children with ASD than in typically developing children, which may suggest abnormalities in neuronal function and/or communication. Moreover, while the spine density of amygdala neurons remained constant throughout the lifespan in typically developing individuals, it decreased in adulthood in those with autism.

These studies provide a first attempt to characterize cellular changes in a brain structure that is important to processing emotional information, a capacity that is often altered in ASD. Findings indicate that abnormalities in the amygdala in ASD occur not only at the macroscopic but also at the microscopic level, thus potentially affecting the way neurons function. The observation of differences in the growth trajectory of neurons in this region also implicates a role during development. More research on cellular mechanisms in the amygdala, as well as other regions of the brain that have been implicated in ASD, will be instrumental to identifying potential targets for treatment.