Research on the postmortem brain has shown that gene expression, the process whereby genes are turned on and off to make proteins, is altered in individuals with autism spectrum disorder (ASD). Yet the molecular mechanisms that disrupt gene expression in ASD are little understood.

Two new studies suggest that changes in gene activity that do not modify the DNA sequence, also referred to as ‘epigenetic,’ may play a role. Epigenetic mechanisms are known to be important in brain development and can be affected in disease. One such mechanism, called ‘DNA methylation,’ was the focus of new research on the ASD postmortem brain.

In an article1 recently published in Human Molecular Genetics, Chloe Wong, Jonathan Mill and their collaborators investigated changes in DNA methylation in 43 ASD postmortem brains and 38 brains from donors with no psychiatric disorders, which were acquired from Autism BrainNet and the University of Maryland Brain and Tissue Bank. The ASD brains included cases of idiopathic autism (i.e., without a known genetic cause) and cases of a genetically defined form of autism called ‘chromosome 15q11.2-13.1 duplication syndrome’ (dup15q), in which the chromosomal region 15q11.2-13.1 is duplicated. The study, which examined over 200 postmortem brain samples collected from different brain regions, including the cerebral cortex and the cerebellum, aimed to provide the first systematic analysis of epigenetic changes in the autism brain.

One key finding of the study was that, despite differences between idiopathic and syndromic autism, changes in DNA methylation in both ASD types were correlated, suggesting a common molecular substrate. To understand the impact of these changes, the researchers then examined the associated genes and discovered that, in both idiopathic autism and dup15q syndrome, changes in DNA methylation impacted biological processes related to immune functions and neuronal communication. 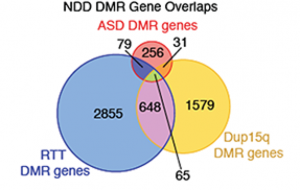 These results resonate with findings from another study on DNA methylation in autism2, which appeared in Cerebral Cortex earlier this year. The study, which was authored by Anne Vogel Ciernia, Janine La Salle and their colleagues, examined DNA-methylation in 28 postmortem brains from donors with idiopathic autism, dup15q and Rett syndrome, an autism-related condition caused by a mutation in the MECP2 gene. The brain tissue examined in this study was obtained from the National Institute of Child Health and Human Development (NICHD) Brain and Tissue Bank for Developmental Disorders at the University of Maryland. While the number of brains examined was smaller than the study by Wong et al., Vogel Cernia and her collaborators used an approach that allowed them to examine a larger portion of methylated sites across the whole genome.

The researchers found that idiopathic autism, dup15q and Rett syndrome were uniquely characterized by hundreds to thousands of regions of the genome that were more (or less) methylated compared to the cases without autism. Yet, consistent with results from Wong et al., Vogel Cernia and her collaborators identified common elements across all three of the disorders.

For instance, the changes in DNA methylation observed in idiopathic autism, dup15q and Rett syndrome appeared to be important for processes involved in the development of brain structure and anatomy. Moreover, when looking at the genes associated with the regions of the genome that were differentially methylated in these disorders, the researchers found that they were similarly linked to functions of the resident immune cells of the brain (microglia) that are involved in inflammatory processes, such as during infection.

Together, these results support previous research showing that molecular processes involved in immune functions and neuronal communication are altered in ASD. By highlighting similarities in molecular changes and their functional role in both idiopathic and syndromic forms of autism, these studies demonstrate the existence of common, disease-associated pathways, despite remarkable genetic heterogeneity. Identifying mechanisms of disease that converge across disorders with different genetic causes is important, as scientists can leverage these shared pathways to find therapeutic targets.