My last memories of…

Eric, Ashley and I playing on a Sunday morning. It was the usual Sunday routine. The 3 of us laughed and were silly while dad slept late. Eric had recently accepted His little sister into his life. The evening before, they embraced and exchanged a kiss. This was Eric’s family. That evening, Eric fought his last seizure bravely. He would have been 7 years old this year. His illness had won.

The weekend before, Eric was practicing making a basket at a family celebration. He was learning basketball by learning through motion at school. Though his lack of co-ordination would not allow him to reach the basket, Eric maintained his goal.

Eric became frustrated and would slap his head when he could not say anything.

The last few weeks of his life he mastered sign language. We hoped this was a breakthrough. The next one would be words then sentences.

In the August before Eric died, a dream of his came true when he met Barney face to face. Like Barney, Eric kept us going day by day. We keep his collection of Barney videos in his dresser. There are 31 of them. Eric new all of them by heart.

One of the proudest memories of mine is of Eric’s preschool graduation. He endured long days of hard work. I had many conversations with his teachers of how he had progressed and that he would overcome his disabilities. We all hoped everyday that he would get better.

Throughout his 5 and a half years, we prayed for a miracle. Now, we remember Eric’s life and it’s significance. Happy Birthday to Eric. Our memories of losing you replaced with memories of loving you. 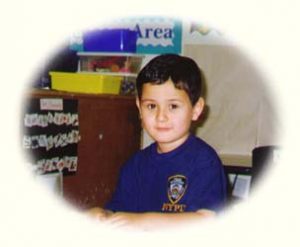