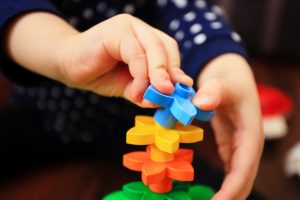 Disruptions in long-range connections between neurons can lead to changes in brain communication. Alterations in brain connectivity have been reported to occur in autism spectrum disorder (ASD), but the underlying microanatomical mechanisms are poorly understood.

One possibility is that altered connectivity may be linked developmentally to changes in the cortical subplate, a zone of the brain that helps establish neuronal connections during the fetal period, a new study1 suggests.

During fetal development, the cortical subplate gives rise to a number of neuronal cell types that are critical for the formation and stabilization of long-range cortical connections. In adulthood, the majority of subplate neurons die off, but some are retained.

Past studies of postmortem brain tissue have demonstrated an increase of subplate neurons in individuals with schizophrenia and seizures 2,3, suggesting that the brain may be atypically maintained in an earlier developmental state in those conditions. The research from Thomas Avino at the University of California, Davis, and Jeffrey Hutsler at the University of Nevada, Reno, provides evidence that an increased number of subplate neurons remain in ASD compared to neurotypical individuals. 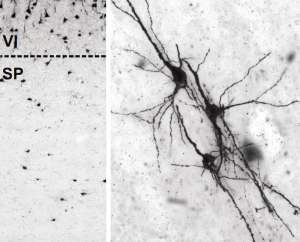 Left: Neuronal profiles in an ASD case. The dashed line indicates the approximate boundary between the cerebral cortex (layer VI) and the white matter/subplate region (SP). An unexpectedly high number of neuronal profiles are present within the subplate region. Right: White-matter neurons from an ASD case. In this image, several multipolar/polymorphic subplate neuron types are shown. Image provided by Jeffrey Hutsler/University of Nevada, Reno

To conduct this study, the researchers used neuronal staining and morphological characterizations of brain tissue from 11 individuals with ASD and 12 neurotypical individuals, which was donated to the Autism Tissue Program (now Autism BrainNet), the Harvard Brain Tissue Resource Center, University of Maryland’s Brain and Tissue Bank, Autism BrainNet and the University of Miami Brain Endowment Bank.

Previous studies gave some evidence for a potential disruption of the subplate in ASD by showing a lack of clear separation between the grey and white matter4 . The current study provided a more systematic comparison of neuronal cell types within a few specific regions of the subplate in ASD versus neurotypical brains.

This study showed changes in the subplate zone of the brain for the first time in individuals with autism. As the subplate is involved in establishing connections between different parts of the brain, the researchers hypothesize that changes in this region may play a role in altering brain wiring in ASD during development. However, the current study was limited to the assessment of a few regions of the brain due to constraints in tissue availability.

Characterization of additional cortical regions, requiring access to larger numbers of postmortem brains will be needed to understand if this is a widespread phenomenon or whether particular areas of the ASD brain are more or less susceptible to subplate disruptions. If further data confirm these results, factors leading to disruption of subplate organization may prove to be important for understanding the causes of ASD.