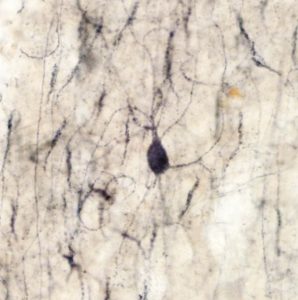 A chandelier cell in the prefrontal region of the brain in a donor with autism. The cell body is surrounded by cartridges (black) arranged in a parallel fashion. Image obtained from Martínez-Cerdeño/University of California, Davis

Much of the communication within the brain occurs through electrical signals that reflect both excitation and inhibition (E-I) of neurons. Changes in neuronal E-I balance have been implicated in a variety of neurodevelopmental conditions, including autism spectrum disorder (ASD)1,2.

A study published in the journal Cerebral Cortex earlier this year3 examined the postmortem brains of people with and without autism to better understand what leads to changes in E-I balance in ASD. In the study, Verónica Martínez-Cerdeño of the University of California, Davis and colleagues focused on a particular type of inhibitory neuron, called “chandelier cells.”

Martínez-Cerdeño’s group had showed in previous studies5,6 that the brains of people with autism appeared to have fewer of a particular type of chandelier cell that produces the protein parvalbumin. But the method used in those studies did not allow the researchers to rule out whether in the brains of people with autism there were fewer chandelier cells, or whether the chandelier cells had less of the protein parvalbumin. While either change would ultimately impact brain circuit communication, shedding light on the ways in which chandelier cells are affected in ASD would be important to understand the mechanisms that drive brain and behavioral changes in ASD.

Using the new method and brain samples, the researchers showed that the prefrontal cortex region of the brain of donors with autism had fewer cartridges than donors without the condition. This finding replicates the results from the previous studies, and provides further support for the possibility that an actual loss of chandelier cells may be affecting the activity of neural circuits in the prefrontal cortex in ASD.

The loss of chandelier cells is likely to cause a reduction in neuronal inhibition, which may lead to a brain circuitry that is overexcited, which in turn could result in sensory overload or even to epilepsy. Such findings may help explain changes in the brain activity of people with autism and provide a window into potential treatments. Further studies would be needed to understand what causes the loss of chandelier cells in the brain of people with autism, and whether other brain regions beyond the prefrontal cortex also have fewer of these cells.