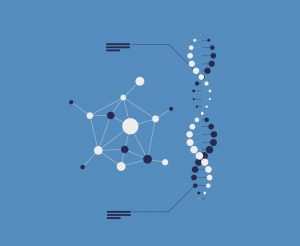 Hundreds of genes have been linked to autism spectrum disorder (ASD) risk.

But these genes still explain only a minority of cases.

Changes in parts of the genome called ‘noncoding regions’ that affect how genes function, but are not actually genes themselves, may also play a role in ASD.

A recent study1 provides insights into one such process, which involves molecules called circular RNAs.

Circular RNAs (circRNAs) can ‘sponge up’ other molecules made from noncoding regions of the DNA, called micro RNA (miRNA), to block their function2,3. miRNA are important regulators of gene activity, as they tend to reduce protein production and have been shown to play a role in ASD. CircRNA can also alter gene expression, but whether they are implicated in ASD was unclear until now.

The new study found that circRNAs are altered in the ASD brain. These circRNAs appear to change how much of the key ASD risk proteins are made.

The study was led by Trees-Juen Chuang at the Academia Sinica and National Taiwan University.

To assess the function of circRNAs in ASD, Chuang and colleagues compared circRNA levels in the postmortem brain of donors with and without ASD. The researchers examined RNA data gathered from a previous study of postmortem brain tissue from 48 individuals with ASD and 49 without ASD4. This brain tissue was acquired from the Autism Tissue Program, at the Harvard Brain Tissue Resource Center (now Autism BrainNet) and the NIH NeuroBioBank.

They uncovered 60 circRNAs that were either increased or decreased in the ASD brain.

Finally, the researchers used two human neuronal cell lines to confirm, for one particular circRNA (circARID1A), that the circRNA was, indeed, acting to sponge up its target miRNA (miR-204-3p). This experiment showed changes in the target protein levels, including those of ASD risk genes such as HSD11B1, NLGN1 and STAG1.

The results of this study suggest a new way in which gene activity could be affected in ASD. A role of circRNA should, therefore, be considered in future studies that examine the molecular mechanisms of autism.