Exploring the biological basis of social challenges in ASD 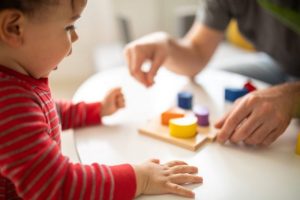 Many people who have autism spectrum disorder, also called ASD, have difficulties with social interactions. ASD is associated with changes in hundreds of genes, but it is unclear how these changes lead to the behavioral challenges experienced by people who have ASD. A recent study1 highlighted a small set of genes in a part of the brain called the amygdala, which might be involved in the social challenges seen in ASD.

The amygdala controls emotions and is part of the “social brain” network. Changes in the normal functioning of the amygdala can result in anxiety and in challenges in social communication – both of which are prevalent in people who have ASD2.

Joshua Corbin, at Children’s National Hospital in Washington D.C., and Arnold Kriegstein, at the University of California – San Francisco, reasoned that understanding changes in the genes that control the amygdala during brain development could help uncover genes that are involved in the social challenges seen in ASD.

Corbin and Kriegstein’s team studied 323 genes that are linked to ASD. They looked at the activity of these genes in the human amygdala using a human gene expression dataset called the BrainSpan project. They also looked at data that was already published on gene expression levels in the neurotypical brain3. The BrainSpan database and neurotypical study contain information on gene expression in the postmortem human brain across development. The researchers found that 271 genes that are linked to ASD are active during the development of the amygdala in the human brain.

The researchers also looked to see how genes that are linked to ASD were expressed in the mouse brain by examining a mouse brain database called the Allen Brain Atlas. Comparisons with mouse data gave the researchers a more detailed view of when and where gene expression levels changed during development of the amygdala. They found 80 genes that are linked to ASD that were expressed during development of the amygdala in both the human and mouse brain. Many of these amygdala-specific genes were expressed in excitatory neurons, which are important for brain communication.

Changes in hundreds of genes have been linked to ASD. By studying existing gene expression data in postmortem brain samples from people who have ASD and those who have neurotypical development, researchers found a small set of genes that are important for the development of the amygdala and are linked to ASD. More research is needed to better understand the relationship between these genes and the difficulties with social skills that people who have ASD may experience.