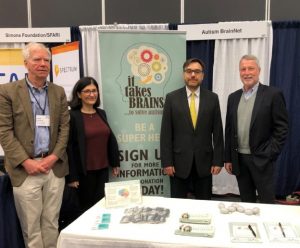 Autism BrainNet, a program funded by the New York-based Simons Foundation Autism Research Initiative (SFARI), announces a new collaboration with the Douglas-Bell Canada Brain Bank (DBCBB). This alliance will allow Canadian individuals and families the opportunity to consider making a postmortem brain donation to help advance research on the causes and treatments of autism spectrum disorder.

Autism BrainNet was launched in 2014, with a mission to accelerate the progress of brain research by fostering worldwide collaboration among scientists across multiple disciplines through sharing the rare resource of human brain tissue. Autism BrainNet’s director, David G. Amaral, notes, “While we have received brain donations from Canadian families in the past, we have not yet attempted to reach the broader Canadian autism community.

This new collaboration is a first major step in that direction.” The program is seeking donations of the brains of those individuals diagnosed with autism during their lifetimes.

The Douglas-Bell Canada Brain Bank, based at the Douglas Mental Health University Institute (a McGill University affiliate), has become one of the most important brain banks in the world. Founded in 1980, it currently houses and manages more than 3,000 brains, as well as a large relational database containing demographic, clinical and developmental histories of their donors. Supported by McGill’s Healthy Brains for Healthy Lives initiative and by the Quebec Network on Suicide, Mood Disorders and Related Disorders, the Douglas-Bell Canada Brain Bank is one of the rare brain banks in North America to collect brains from individuals who suffered from different neurodegenerative diseases such as Parkinson’s disease, Alzheimer’s disease and other dementias, as well as diverse mental disorders, including schizophrenia, major depression, bipolar disorder and substance-abuse disorders. “Currently, there has not been a major effort to do outreach and collection of donations to support research on neurodevelopmental disorders such as autism,” says DBCBB director Naguib Mechawar. “But with the development of major new autism-research initiatives at McGill through the establishment of the Azrieli Centre for Autism Research, we were motivated to find a mechanism through which we could contribute.” Added DBCBB co-director Gustavo Turecki, “Given the heterogeneity of autism spectrum disorder, it is essential that researchers study a large number of brains. Establishing a resource for this is only possible if organizations collaborate on outreach and collection. Since Autism BrainNet provides tissue to researchers worldwide, we are confident that all autism researchers, both in Canada and beyond, will benefit from this collaboration.”

SFARI director Louis Reichardt also views the collaboration with high enthusiasm: “It is absolutely critical that we understand what has been altered in the brains of individuals with autism. While important data has and will be obtained using rodents and even non-human primates, one cannot be convinced of the importance of these results for understanding human autism without confirmation using donated human brains. Families willing to make these donations are contributing to a better future for all individuals with autism.”

The two groups’ collaboration will begin with outreach efforts in the province of Quebec, moving into other provinces in the near future. Families interested in learning more about the donation process can go to AutismBrainNet.org. To make a donation, please call 877-333-0999.