Autism BrainNet relies on the teamwork of many clinical and research staff to acquire and distribute the tissue provided by our donor families. This staff is located at four centers, or nodes, across the United States. We recently spoke with Patrick Hof, M.D., Director of the Seaver Autism Center Tissue Program at the Icahn School of Medicine at Mount Sinai, the New York node, to learn more about his role and experience working for Autism BrainNet. 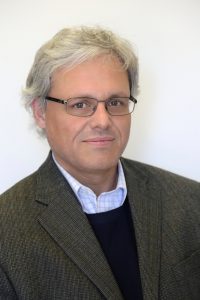 I developed an interest in studying the brain and brain disorders early on, while I was a medical student. In fact, I started my career somewhere at the opposite end of autism, as my first research was in the fields of Alzheimer’s disease and aging. In those fields, I worked mostly on how human brain circuits are affected. I then became very interested in those brain circuits in neurodevelopmental disorders, and in particular in autism spectrum disorder (ASD). It became clear to me that there were few resources to study ASD and a staggeringly low number of available brains to conduct research studies on the neuropathology of this disorder compared to neurodegenerative conditions such as Alzheimer’s disease. That was also a motivation for me to find solutions and coincided with the initial conversation about developing the Autism BrainNet network.

I direct the New York node, which is based at the Icahn School of Medicine at Mount Sinai and is associated with the Seaver Autism Center. I coordinate the efforts in outreach as well as efforts to recover brain donations in our catchment area. Whenever there is a donation, we have to be ready to conduct a brain specimen recovery, even if it is in difficult parts of the country, where there is no infrastructure to do that type of work. It is a challenging process.

What do you see as one of the biggest findings or revelations that you have encountered by doing research in the field of autism?

One thing that surprised me when I first got interested in the neuropathology of autism is that the brains of individuals with autism do not necessarily show gross, evident abnormality. This was strange to me, because I came from the world of neurodegenerative disorders where the brains of patients have lesions, sometimes a lot of lesions, and these lesions represent a clear signature of the disease. In autism, instead, there is essentially nothing that jumps out at you. But we know from structural and functional brain imaging studies that there are changes. So, the first revelation I had was that we have to look at the autism brain with much greater granularity, down at the cellular level. The second revelation was that the brain of each individual is likely to show differences in the severity and distribution of any cellular pathology. Indeed, we find a striking degree of interindividual variability. Also, because ASD is developmental, the brains of patients come to us at different ages. So, we are faced with an enormous amount of variation that we have to figure out. And to do so, we need more brains.

Why is it important for people to understand that studying postmortem brain tissue may help us advance autism research?

Using human postmortem brain tissue is fundamentally important. ASD affects humans, so anything that we try to do to model this disorder in animal systems is going to be imperfect and give partial answers. Although it’s still very important to use animal models to identify mechanisms of disease and potential therapeutic targets, we can model accurately only certain aspects of the disorder. So, we have to understand ASD in general in the brain of the human species; that can only be done by studying the human brain and its pathology. Also, postmortem brain analyses are extremely important because the data from those studies can be correlated with data from brain imaging studies, and with neuroclinical and neuropsychological evaluations of the patient.

What has been the most rewarding aspect of your collaboration with Autism BrainNet?

I think it’s really the team and working with everybody involved in the network. It’s a very collegial and dedicated team who has the desire and the passion for providing resources to move autism science forward and ultimately finding solutions for the patients and their families. It’s been a fantastic privilege and pleasure to work with all the Autism BrainNet staff.

You have been working on maintaining a celloidin collection of brain tissue for research purposes. Can you tell us what this collection is, why it was created and is valuable to the research community?

Not much is known of the cellular neuropathology of ASD. Our group at Mount Sinai participated in the development of the Autism Celloidin Library, a project that was originally sponsored by Autism Speaks in the early 2000s. The collection includes 28 brains, 14 from ASD donors and 14 from neurotypical donors, which have been embedded in celloidin and processed so to allow for rigorous stereologic analysis of the tissue and create a permanent tissue record. These materials are currently stored at Mount Sinai and are made available to the scientific community through Autism BrainNet. This resource has been used in a significant number of studies, which provide a better understanding of many regional and cell population-specific changes in the brains of individuals with ASD. This collection represents an extremely valuable resource for exploratory studies as well as large-scale histopathological investigations.

We decided to scan and annotate the entire Autism Celloidin Library to develop a resource for Autism BrainNet and SFARI. We will be in a position to provide a permanent cytoarchitectural library of the 28 brains. Importantly, this minimizes risk of damage to these large histology slides. We also will annotate the cytoarchitecture of the cases in the resource to provide an anatomical guide to researchers and help them navigate the cellular organization of the various brains, identify the gray matter regions with sufficient detail for designing quantitative analyses at high magnification.

We hope to provide an easy-to-access, high-quality comprehensive resource for investigators interested in the cellular neuropathology of autism. In archiving the Autism Celloidin Library in this way, we will also provide a permanent and safe digital repository of the entire data represented by the glass-mounted sections, which will prevent risk of damaging this unique and unreplaceable collection of human brain tissue.

I think in the future we have to pay more attention to alternative models for use in basic research. I also think the neurogenetics of autism is going to make swift progress and will ultimately guide the basic science towards understanding therapeutic targets or specific mechanisms in ASD. As I mentioned earlier, combining postmortem brain evaluation at a refined cellular scale of resolution and studies of the brain using functional and structural brain imaging will also help us understand the relationship between those deficits and the genetic changes in ASD.