Serotonin, also called 5-hydroxytryptamine or5-HT, is a chemical that helps to control social behaviors and other body functions including mood, sleep and appetite. Serotonin also plays an important role during brain development. Studies have reported increased blood levels of serotonin1,2,3 in people who have autism spectrum disorder, also called ASD, compared to people who have neurotypical function. These studies point to serotonin as a potential biomarker of the disorder. Other studies suggest a role for serotonin receptors or the serotonin transporter.4,5,6 Serotonin receptors are proteins that allow serotonin to communicate with neurons. The serotonin transporter is a protein that controls serotonin levels in the space between neurons, called synapses. 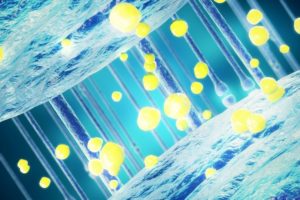 Signal exchange: 3-D view of neurons (blue) exchanging chemical signals (yellow). Serotonin is one type of chemical that neurons use to communicate with each other. Image credit: Rostislav Zatonskiy/Alamy Stock Photo

The serotonin transporter and serotonin receptors are targets of a class of drugs called ‘selective serotonin reuptake inhibitors’ (SSRIs). These drugs are used to control serotonin in a variety of psychiatric conditions. In ASD, doctors sometimes prescribe SSRIs to treat symptoms, such as repetitive behaviors and anxiety. Studies of these drugs have shown possible benefits in adults but not in children.

The study was led by Cheryl Brandenburg and Gene Blatt of the Hussman Institute for Autism in Baltimore. To date, this study is the largest analysis of serotonin function in the postmortem ASD brain. It included 60 brain samples from adults and children with and without ASD. All samples were from the University of Maryland Brain Bank and Autism BrainNet.

Brandenburg and Blatt found that the brains of people who have ASD had decreased levels of the serotonin transporter compared to neurotypical brains. This was especially true in adults. These differences were found in only one of the three brain regions that were studied — the anterior cingulate cortex (ACC). The ACC controls behaviors that are associated with emotions, motivation and decision-making and has been shown to play a role in ASD.8-11

In the ACC region, the researchers also found changes in the 5-HT2 serotonin receptor in adults but not in children younger than 16 years.

These results show that changes in serotonin function in ASD may be specific to receptor type and brain region, and that these changes may be age dependent. These results suggest that new drugs tailored to specific receptors might be more helpful than the current SSRIs. The researchers argued that research aimed at identifying the specific serotonin receptors that are affected in ASD is a critical step toward developing targeted therapies that could improve treatment outcomes.