Over 150 genes have been implicated in autism spectrum disorder (ASD). However, the mechanisms that may contribute to increased risk for the condition remain little understood. A new study1 shed light on one mechanism that controls gene activity, called ‘allele-specific gene expression,’ so far understudied in ASD. 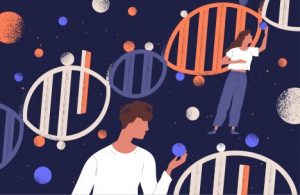 Typically, children inherit two copies of their gene code, which are also called ‘alleles’: one copy from their biological mother and one copy from their biological father. In some cases, the alleles are the same, but in other cases, they are different. Greater use of one allele over the other — allele-specific gene expression — can result in different features and behaviors in a person. Many genes use one allele more than the other, and this arrangement is similar from person to person.

The goal of the new study was to examine how alleles are used in the ASD brain and whether their usage differed from the neurotypical brain.

Daniel Geschwind at the University of California, Los Angeles, and his collaborators, measured the activity of gene alleles in postmortem brains of almost 100 people. These brains were acquired from several tissue banks, as well as the former Autism Tissue Program, which is now Autism BrainNet. Most of the samples came from individuals with ASD, though a few cases had 15q duplication syndrome, a genetic condition associated with ASD that is caused by the duplication of part of chromosome 15.

The researchers found that greater usage of one allele over the other occurred less frequently in the brains of people with ASD than in the brain of people without ASD. However, when it did occur in the ASD brain, it was the less-used, minor alleles that were activated more often, in contrast to the neurotypical brain. This finding is important because many of these minor alleles are genes with rare mutations that cause ASD. Thus, a stronger effect of these mutation-carrying genes in the ASD brain than in the neurotypical brain may lead to a greater risk of ASD.

An additional finding was that two regions of chromosomes 14 and 15 were among the places of the genomes where use of the minor alleles was stronger in the brain of people with ASD and 15q duplication syndrome, compared to neurotypical brains. This observation provides evidence of shared mechanisms of disease between the two conditions.

The study highlights the role of specific-allele gene expression as one key mechanism that can control gene activity in ASD and contribute to increased risk of the disorder. It also provides the most in-depth analysis to date of allele-specific gene activity across the complete set of DNA copies in ASD. Lastly, the inclusion in the analysis of cases with both ASD and 15q duplication syndrome advances the knowledge of biological mechanisms that may be similarly shared in ASD-associated conditions with and without a known genetic cause.