“Use anything on my body for James”
(written by my husband, Patrick,
soon after he was diagnosed with cancer on Mother’s Day weekend in May 2002).

Little James Patrick Davis, his grandson, 5 1/2 years old, was diagnosed with autism at 18 months old. Was he deaf, why wasn’t he paying attention, why wasn’t he interacting with other children? Then we read an article in the Long Island Newsday about Thelma and Bob Krinsky, founders of Grandparent Advocates Supporting Autistic Kids (GASAK). It was then that we knew our daughter and son-in-law, Lisa and Jim’s, suspicions were probably right. James Patrick had a problem similar to the Krinsky’s description of autistic children and their grandson. From there our lives changed.

Opa loved James so much that he readily agreed to be a donor for brain tissue research. There was no hesitation. His grandchildren meant the world to him, including Tara, 14 months, the daughter of our son, Patrick, and his wife, Karen. What were their concerns to be? What about any future grandchildren? What had caused James’ problem—genes, innoculations, environment?

Opa always contributed to the effort to find answers. He participated in fund raising for the 1st and 2nd annual Walk FAR for NAAR at Eisenhower Park, Long Island, New York. The first year he completed the walk slowly with great satisfaction attributing his slow pace to arthritis. The second year he helped set up our area, “For The Love of James” and stayed behind to welcome our team back after the 3 € mile walk. Little did we know he wouldn’t be with us for the 3rd year. His body would become his lasting contribution to Autism research.

Patrick John Healy (Opa) was born in New York City on January 10, 1940. He was the only child of Krescentia and Patrick Healy. He attended Holy Name School, Manhattan Prep and Pace College. His father, a World War II veteran, passed away suddenly from a stroke at 47 years old. Pat was only 14 and his mother worked hard raising him in Manhattan with the support of a loving family of aunts, uncles and cousins with whom he remained very close. His mother was 95 on October 1, 2002.

Pat retired at 54 years old in 1994 from Unilever (Lever Brothers) as Computer Facilities Manager of Information Systems. He was afraid that he might follow in his father’s footsteps and die young and wanted to sit back and enjoy life. He had been a good athlete and he helped with Little League, Scouts, 4H and school functions as our children grew. He was always there for them. When he heard our son, Kevin, say “I stopped and thought how you would have handled it, Dad”, he was very touched and knew that he had guided his children right and had learned to be a good Father.

Pat was very content with his life. He raised his three children to be kind, loving adults, who chose their own way in life and their partners, Jim, Karen and Kim, whom he adored.

He had many friends and yet was a very private person. He was the strong one in our family and strong in his religion. He knew how to use the right words, had a dry sense of humor, and with a snap of the finger he could give a beautiful, touching toast or short speech and say grace at our special family dinners. Until the last few years he would enjoy a fast dance at social functions. One of his friends said, “You could be having a serious conversation with him and ‘YMCA’ (or fast 50/60’s music) would start and Pat was gone and out on the dance floor”. He loved reading, old movies, sports, a good joke and his pool and deck. He always wanted to learn to surf cast, had all the equipment, but never got a chance to try it. He looked forward to our annual vacation on the lake in Maine with our children and grandchildren where you could just be a family for a week and see a beautiful sunset and, on occasion, a rainbow. This past June we were there for our 27th year.

Our children rearranged their personal and work lives for Pat’s last 2 months and surrounded us with their love. They lifted their father into our pool, rigged a camp shower outdoors and carried a TV to our deck for him to enjoy. They fed, bathed, listened and comforted him during the day and in the middle of the night until, one month after our Maine vacation, he left us … with happy memories, laughter and tears.

Little James Patrick has more language now. It has been a long struggle—over 4 years—since his initial diagnosis. He brought a smile to Opa’s face recently when he belched and Opa asked him if it was a burp or a belch. Expecting no reply, James turned and looked at him and said “burp”. That little bit of interaction meant so much to us. Opa always had a special treat hidden for James when he came to visit us. During Opa’s last day with us, he saw baby Tara walk for the first time and James sing, kiss him and say “I love you, Opa”.

By Carole Woodruff Healy and family 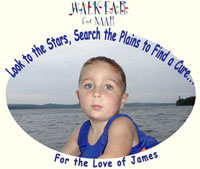 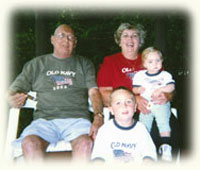 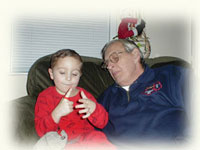 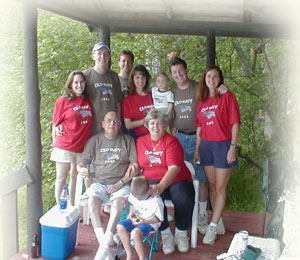 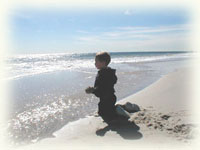 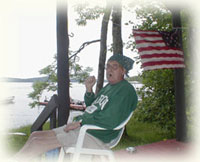 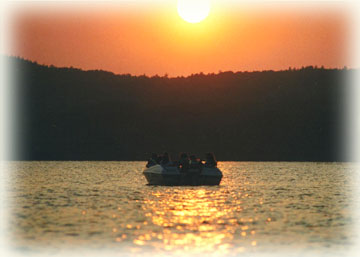