It is my belief that people choose the body they will occupy before they are born (see Journey of Souls by Michael Newton, Ph.D.), in order to learn whatever life lessons they are working on.  Nicole made a very courageous choice, as I believe everyone with an atypical body or brain has.  They don’t have it easy.  Though choosing a challenging body or brain can bring accelerated progress.

Although she was always physically beautiful, Nicole never developed speech, reliability in toileting, nor almost any ability to function.  She was often upset or even agonized.  When she was young, she would scream, jump up and down and hyperventilate.  When older, she would scream and hit herself on the chin.  To her credit, she was never at all aggressive toward anyone else.

She was “unfiltered,” sitting down on the floor in the middle of a store when tired, for example. Throughout her life she would destroy things, especially at night, which meant she had to sleep in a bare room on a mattress on the floor.  She occupied her time with eating as much as allowed and trying to get more, fingering small plastic objects, rearranging objects, diving for any small bit of paper on the floor or leaves or trash on walks, and annoying behaviors such as flushing the toilet repeatedly (we had to remove her toilet lever and flush it manually), turning on the shower and wasting water if not flooding the bathroom (shower had to be disconnected too and turned on with a special lever), pulling all electrical plugs out of outlets (her room had to be rewired), etc.  All of these behaviors made her difficult and frustrating to care for, but I’m sure it was not much fun for her, either.

On the positive side, she enjoyed taking walks, liked to listen to music at times, and liked people, or some people sometimes.  She would pull people toward her to sit with her, hold hands with them, kiss them with a brush from her nose, and push them away when she was done with them!

Nicole made an indelible impression on people and will be missed. 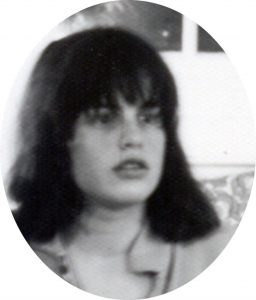