In Memory of Mac Clayton — A Tribute

Mac Clayton was a participant at Eden W.E.R.C.s for the past six years. In early March he suffered a massive heart attack and passed away shortly thereafter, leaving a tremendous void in the home he had shared with his parents for 55 years, as well as in his home away from home, Eden’s Dobias Center. More than two dozen Eden W.E.R.C.s, A.C.R.E.s and Institute staff paid their last respects at the March 11 memorial service. W.E.R.C.s’ Mario Jumique, Steven Foltiny and Scott Rieger served as pallbearers, along with Eden President David L. Holmes.

In a moving tribute written just after the service, Anne Holmes observed that two important men had passed away on March 8—Mac Clayton and Joe DiMaggio. Both led lives filled with accomplishments; both inspired awe and admiration in those who knew them. New York Times News Service writer Bob Herbert described DiMaggio as tall, handsome, modest, tough-adjectives that also described Mac Clayton. But perhaps the most often-used word in eulogizing DiMaggio was “champion.”—a “valiant fighter,” as Webster’s Dictionary puts it. On this page, EDENewsbriefs pays tribute to another champion.

Mac came to us at the age of 49 and challenged us to expand the services we offer. He was an integral part of the newly developed Primary Intervention Program, and as one of our senior participants, he provided impetus for us to secure medical care that is sensitive to developmentally disabled people who are aging. Mac made tremendous progress in our six years together, proving once again that learning never stops. He will be missed.

Mac was having a tough morning and simply did not want to sit still to complete the subcontract project he was working. on. After taking his shoes off several times—he has never especially liked to wear shoes—he sighed mournfully. I looked at him and said, “What’s going on, Mac?” He got up and took my hand, leading me over to the couch, pushed me to sit down and then sat down beside me. I asked him what he wanted. Normally Mac kept one eye closed for most of our interactions, but this time he looked me straight in the eye, with both eyes open, laughed wholeheartedly and put his feet up. Mac was simply saying that on this rainy Monday, it was time for a break.

I remember Mac vividly, his expressive face so communicative that words were unnecessary. When I greeted Mac and took his hand, he reciprocated with a penetrating gaze—a connection, I felt. At times he shared frustrated sighs; at other times, with a look of dignified calm and contentment, he’d take my arm amiably and invite me to walk with him through the center. I valued our interactions and respected his inner strength.

Mac was masterful at achieving his purpose. Where others might inadvertently signal their intent to grab an extra snack or soda, like a matador with his cape Mac was very subtle. After first attempts to walk out of the room were unsuccessful, he would take me by the hand to go with him, permission by association, he apparently figured. When that didn’t work, plan B was a hug. He would give a great smile, reach his hands out to my shoulders’, wrap his arms around me in a big embrace—and then try to get past me!

The impact Mac had on his family is profound. Mr. and Mrs. Clayton kept Mac at home with them for his entire life, through many years when institutionalization was the treatment of choice for a developmentally disabled child. Mac also had a major impact on his Eden family. He inspired us to think about services for adults in their 50’s. He taught us that learning never stops, and he challenged us to develop a program model that would continue to meet his needs and those of his senior peers. Mac Clayton made everyone who worked with him love and respect him because every day of his 55 years he struggled but, not unlike Joe DiMaggio, most days he got a “hit.

Although he never could speak, Mac’s eyes and mannerisms spoke volumes about his attitude toward events and people in his life. One thing he was very clear about was that he loved to eat and was less than enthusiastic about working. From that description one might think Mac was overweight and lazy, but this was not the case. He was tall and slender and could be highly energized when a task was expected of him. Throughout our years of teaching Mac, he taught us, too—to have greater patience and awareness of the unique qualities that he, as a man with autism, brought to life. Tenacity comes to mind when we think of Mac and fierce independence as well- two attributes that Joe DiMaggio, who passed away on the same day as Mac, brought to his remarkable life. As the words of the song go, “Where have you gone, Joe DiMaggio?” so we say, “Where have you gone, Mac Clayton?” And we know the answer: to a heavenly resting place where there is plenty to eat and no one to tell you what to do.

Mac was born Carlton MacDonald Clayton on September 10, 1943. He was Carlton and Agnes Clayton’s only child. His mother decided to call him “Mac;” after all, there was already one Carlton in the family. In his teens, he spent time at a Philadelphia area institute, making such an impression on one neurologist that the man contacted the Claytons years later, just to see how Mac was doing. Mac liked the outdoors; he enjoyed taking walks and going to the park. He wasn’t big on hobbies, but liked to listen to music sometimes and loved to eat most of the time. Mac had a special way of communicating with his family, and though he never spoke, his parents always felt they knew what he wanted to say. “He often seemed to sense what was about to happen,” his father says. “We were convinced he could read our minds!”

The Claytons have been married for nearly 65 years. “Our son, Mac, was a centerpiece of our family for all of the years he was with us,” says his father.

Recurring themes pepper the remembrances above -Mac’s love of food and dislike of shoes, for example. And of course, the hugs. Mac’s resolute spirit and resilient strength, the hearty laugh and the twinkle in his eye—all will live on in the hearts of those who knew him. Reflects Scott Rieger, supervisor of the W.E.R.C.s Primary Intervention Program. “Mac was the purest of souls.” 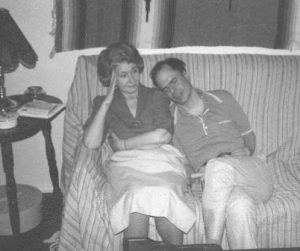 Mac Clayton with his mother, Agnes, in an undated photo