Meet our Team: A conversation with Naguib Mechawar, director of the Douglas – Bell Canada Brain Bank

Autism BrainNet relies on the teamwork of many clinical and research staff to acquire and distribute the tissue provided by our donor families. Two years ago, Autism BrainNet established a collaboration with the Douglas–Bell Canada Brain Bank, the largest brain bank in Canada, to expand brain donation collection for autism research.

We recently spoke with Naguib Mechawar, Ph.D., director of the Douglas–Bell Canada Brain Bank and professor of psychiatry at McGill University, to learn more about his work with Autism BrainNet and his research using postmortem brain tissue to better understand the biological changes underlying psychiatric disorders. In his research, Mechawar focuses on brain changes associated with depression and suicide — two conditions that may also affect individuals with autism.

The interview has been edited for brevity and clarity. 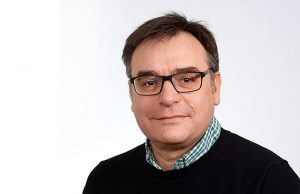 Naguib Mechawar, Ph.D., is the director of the Douglas–Bell Canada Brain Bank and professor of psychiatry at McGill University.

Can you tell us more about your work at the Douglas–Bell Canada Brain Bank and the partnership with Autism BrainNet?

As director of the Douglas–Bell Canada Brain Bank, I make sure that our operations run smoothly and that we establish important partnerships like the one with Autism BrainNet. Our main objective, of course, is to be able to accept the brains of people who were affected by a variety of mental conditions. Our brain bank has really the advantages of collecting and preparing samples from all or nearly all brain disorders. That includes neurological disorders, neurodegenerative disorders, like Alzheimer’s disease, Parkinson’s disease, Huntington’s disease, amyotrophic lateral sclerosis (ALS), but also psychiatric disorders, including bipolar disorder, depression, schizophrenia, and others. And now, through our partnership with Autism BrainNet, we will soon have the opportunity to also collect the brains of people on the autism spectrum — and that’s important. Ultimately, you know, the main goal is to be able to provide the scientific community with high quality brain samples that have been well characterized, which is very important for advancing research on all these conditions.

How did you become involved with Autism BrainNet?

Well, I’ve been doing this work for 15 years now. Initially, when I took up a faculty position at McGill University and as a researcher at The Douglas Research Centre, there was this immense potential behind the brain bank that had been in existence since 1980. And in the past 15 years, I’m proud to say that together with my colleague Gustavo Turecki, who is co-director of the Douglas–Bell Canada Brain Bank and is responsible of the psychiatric aspects of our activities, we’ve really expanded and modernized our infrastructure and developed several important partnerships. A couple of years ago, when David Amaral [Autism BrainNet scientific director] contacted us and asked if we’re interested in partnering, then, of course, we jumped on this opportunity, because there is a growing field of autism research that really requires well-characterized human brain samples. We’re really excited to be able to participate in this now international effort.

That’s wonderful. You are also a researcher, using postmortem brain tissue to look at changes in the brain associated with depression and suicide. Can you tell us more about that work?

The work that I do at the brain bank is for a very wide research community, but it also benefits my own research. Like you said, I am a postmortem brain researcher. Essentially, all the research done in my lab is focused on well-collected samples from people who died from suicide. The main objective of the work carried out in my lab is to understand the molecular and cellular changes that occur in the brains of people who suffered from major depression, with the goal to identify particular cells or circuits that are affected in this condition. We’ve been focusing a lot of our work on a subset of brain cells called glial cells, or glia; we and other groups have found that these cells seem to be strongly associated with mood disorders and with depression and suicide.

A lot of the research efforts in my lab in the past seven, eight years have been dedicated to understanding the impact of childhood abuse on the brain. What is the lasting impact of early life adversity on brain structure and function? The reason we are interested in these questions is that is very well documented in the literature that history of child abuse is strongly associated with a variety of diseases of illnesses, and in particular depression. The suicide rates in people with a history of early life adversity are very high. So, child abuse is one of the strongly predisposing factors to mental illness and suicide, and we’re very interested in understanding how the brain during a very fragile and plastic period of life is impacted by this very severe stress.

What are some of the findings from this research?

Research has shown that several decades after a history of child abuse, you can see some drastic differences in the expression levels of glial cells compared to those in matched healthy people who died accidentally, or to depressed people who died by suicide but didn’t have a history of child abuse. We see specifically that child abuse brings about very important changes in the way the brain is organized, and we think that these changes have something to do with the vulnerability to mental illness and suicide.

I can give you as an example: a study where we looked at oligodendrocytes, which are the brain cells that produce myelin — the substance that wraps axons and allows faster communication of signals between neurons. These cells seem to be very severely affected in one brain region that we examined, called the anterior cingulate cortex. Looking at samples from adults with a history of child abuse compared to people without a history of child abuse and healthy individuals, we were able to see that these cells had some sort of a repression of the activity of genes implicated in oligodendrocyte function and the process of producing myelin. And when we looked at the myelin around the axons in this brain region, we found that there was less myelin around small caliber axons in the brains of people with a history of child abuse1 [for a review of the effects of severe life stressors on the brain, see this review paper2]. This may have an impact on the activity of the cells by leading to less efficient communication between cells because myelin is important for the proper and rapid communication and transmission of nerve impulses.

What do you see as one of the biggest revelations in your research?

The examples I gave about the lasting impact that early life adversity has several decades down the road on brain cells and how they communicate with each other. These findings are a confirmation of animal models studies that have shown how vulnerable the brain is during development. This also adds to the epidemiological and clinical data that showed that childhood is fragile, and you have to care and have a loving environment for kids for them to develop properly and be healthy in many respects. But to actually generate data and even observe under the microscope that there are physical changes in the brain, I think it speaks volumes.

Whenever I give talks about such changes, it really hits hard, because people understand that there’s really something physically changing. It’s the link between brain and mind, and it’s not different from talking about liver or heart disease; there’s an organ, there’s a malfunction, and when you say that a harsh environment early on in life can have a lasting impact on the way the organ functions and is shaped, this is quite significant.

Depression and suicide are unfortunately also linked to autism. How does this research can help address and prevent some of these challenges in individuals with autism?

This research in autism, but also in other conditions should allow us to be able to understand the commonalities (and differences) between conditions that may be associated with suicide and depression. We haven’t conducted such research on autism ourselves. But like I said before, there’s a growing field aimed at understanding the biological underpinnings of autism and all the different comorbidities and different facets of autism. These efforts should be significantly enhanced by researchers having access to well-characterized brain postmortem tissue.

You touched upon the importance of conducting postmortem brain tissue research. Is there anything else you want to add?

Doing this type of research is essential because many of these disorders seem to be human specific. And so, it’s important to have access to the brains of people who do have these conditions. Although animal models such as mice and rats are essential for research in neuroscience and biological psychiatry, they’re still a different species from humans, and the brain of rodents is very different from the human brain. The human brain is not only much larger than the rodent brain; we’ve also seen in the past few years, that there are cell types that are specific to humans, and with evolution some of the cell types that are found in both species have disproportionately increased in size or in connectivity in humans. So, there’s a change quantitatively but also qualitatively in the human brain. This stresses the importance of looking at human brains and might also explain why it’s difficult to translate findings in rodents to the clinic. That’s why we need to study the human brain to better understand the conditions that are specific to our own species.

What has been the most rewarding part of collaborating with Autism BrainNet so far?

I’d have to say at this early stage that the most rewarding aspect has been working with the Autism BrainNet staff and being able to discover what the program has been doing, what its objectives are, and how dedicated the team is to these objectives. I think it’s really inspiring to see the quality of the efforts that are being put behind Autism BrainNet. This to me is quite striking.

It’s clearly a growing area of research that’s generating a lot of excitement. I see it as growing more and more. It’s important to be multidisciplinary and interdisciplinary as much as possible to get answers that will enlighten us about the nature of autism, its causes, and find ways for people to live better lives with autism. This can be done thanks to research — that’s the main goal.