New insights into the function of microglia, a type of brain cell involved in autism 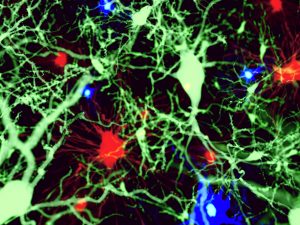 Microglia have long been viewed as the brain’s resident ‘garbage collectors’. They work to keep our brains healthy by removing dying neurons and cell debris. But new research shows that microglia may play a role in how neurons communicate with each other. Neurons are the main information processing cells of the brain.

Changes in microglia function have been linked to autism and other neurodevelopmental conditions1. Postmortem brain studies2 have revealed that microglia tend to be present in greater numbers and may be enlarged in the brains of people with autism compared with people without autism3,4. Furthermore, the activity of genes that control immune functions appears to be different in the brain of those with the condition5-7. This suggests a role for inflammation and microglia in autism.

In addition to controlling immune functions, microglia also help to control how brain cells communicate8-13. A recent study in mice8 led by Ana Badimon and Anne Schaefer at the Icahn School of Medicine at Mount Sinai sheds new light on how microglia and neurons interact. The study did not focus on autism directly, but the findings suggest the possibility that microglia play a bigger role in autism than previously appreciated.

Neurons ‘talk’ to each other by passing electrical signals and chemicals, such as calcium and ATP, the cell’s energy resource. Excitatory neurons drive electrical signals between neurons, whereas inhibitory neurons decrease these signals. Changes in the balance between excitatory and inhibitory activity can affect brain communication and may be a root cause of some of the neurological and behavioral features of autism14-16.

In their study, Badimon, Schaefer, and colleagues found that microglia acted in a similar fashion to inhibitory neurons. After removing microglia from distinct regions of the mouse brain, they observed that in mice without microglia, stimuli that normally did not activate neurons caused excessive neuronal activity and seizures.

The researchers also showed that microglia physically reached toward activated neurons as they ‘sensed’ ATP being released from those neurons. Importantly, microglia could change ATP into a molecule that is known to block neuronal activity17.

These findings suggest that microglia may complement inhibitory neurons by suppressing the activity of neurons. Future studies could assess whether dysfunction of microglia leads to changes in neuron excitability that are often seen in autism and other neurodevelopmental conditions. Such research would provide a step forward toward understanding the role of different cell types in autism and how their interactions affect brain circuits and behavior.