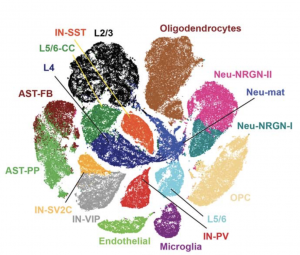 Research using postmortem brain tissue has helped to identify changes in gene expression and dysregulated pathways associated with autism spectrum disorder (ASD). Because these studies used a ‘bulk’ approach that averages RNA measures across the brain tissue, it has been difficult to assess differences in gene expression specific to the many different cell types in the brain. As different types of brain cells perform different functions, a greater understanding of their role is important to clarify the molecular mechanisms underlying autism pathophysiology and identify potential targets for treatment.

To this end, Dmitry Velmeshev, Arnold Kriegstein and their collaborators used a novel technique called ‘single nucleus RNA sequencing’ to find the cell types in which gene activity is changed in ASD. The authors analyzed over 100,000 cells in 41 postmortem brains, which included 15 samples from donors with ASD and 16 samples from individuals without any neuropsychiatric condition.

The findings of this study, which were published in Science, revealed that the strongest differences in gene expression between individuals with and without autism were located in two types of cells, the neurons of the upper (2-3) layers of the cerebral cortex and microglia. 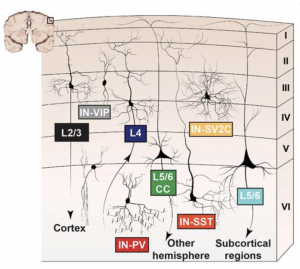 Figure 1: A snapshot across the cerebral cortex. Diagram illustrates the six-layered structure of the cerebral cortex, which is the outer part of the brain. A sample of the different cell types examined in the study is shown across the cortical layers. Neurons in upper layers 2 and 3 are labeled L 2/3 and are indicated by a dark gray box. Microglia are not shown. Image from Velmeshev D. et al.1

Neurons of cortical layers 2/3 allow communication between different parts of the cortex by projecting signals to neurons located in different cortical regions (Figure 1). Microglia are the resident immune cells of the brain, which monitor and respond to states of infection and inflammation. The genes that were found to be differently expressed in these cell types in the brain of individuals with autism are involved in communication between neurons, brain development and activation of microglia, which may be a signal of pathology.

To test whether these differences were also associated with the clinical manifestations of the condition, the authors then correlated changes in gene expression specific to each cell type to the severity of the donors’ symptoms measured through the Autism Diagnostic Interview-Revised (ADI-R). They found that greater changes in gene expression in the upper layers 2/3 neurons and microglia predicted worse behavioral deficits.

These results lend support to previous research suggesting that changes in neurons, as well as non-neuronal cells such as microglia, may be involved in autism. Furthermore, by breaking down the analysis of gene expression at the level of individual cell types, this study provides a finer-grained description of ASD mechanisms that allow scientists to zoom in on the molecular basis of the disorder with unprecedented resolution.