Written by his sister-in-law, Heather, who visited and took him out regularly.

William, a second son, was born in London in 1948 and much loved by his parents and relatives. However, it gradually became apparent that all was not well. His behaviour became distressing, challenging and difficult to manage but he could also be quite lovable.

William’s father was offered a Consultancy post in America but his application to bring his younger “handicapped” son was refused. To keep the family together he accepted a senior post at Newcastle University. This move caused William a major trauma when he was about 5 years old and his behaviour deteriorated further. It was not possible to send him to school – this was the 1950’s.

By his mid–teens William had become so big, strong, aggressive and very unpredictable that when his father was at work his mother could no longer safely cope with him on her own. Very reluctantly they agreed to him going into a Mental Hospital where the staff understood him and cared for him well.

Every week-end his parents took William back home and I first met him there when he was 23 years old. First he would have a long bath, then sit with his father listening to classical or military music, “tuck into” his mother’s cooking and hand his parents his shoes when he wanted to go out for a drive because he loved being driven round the countryside. These pleasures lasted throughout his life.

As a child he was diagnosed as having “Childhood Schizophrenia” but when he was about 40 years old (with autism more generally recognized) his records thereafter described him as having “Severe Mental Retardation with Autism”.

William as a toddler could recite simple nursery rhymes but lost this by age 2 years and then never had any speech. His communication was by eye contact, or taking a person to what he wanted, growling with displeasure, biting his hand, hitting his head and running from wall to wall with frustration. He would also make delightful whinnying noises when happy.

Sadly when William was 39 years old his father died, followed shortly by his mother and then his older brother. When William was 50 years old the Mental Hospital, where he received good care and understanding, was closed and he was moved with others into a community house with 24-hour Supported Living for the next 18 years.

He eventually settled and was able to enjoy his new home but he reacted very badly to staff changes. He continued to love his food … both his own and anybody else’s if they were not looking! He enjoyed his spa baths, relaxing in his chair, watching cartoons like the Simpsons, having aromatherapy and sitting on his swing seat in the garden. He also enjoyed activities available in the community such as swimming, hydrotherapy, the sensory centre, his weekly lunch out and going for walks by the sea. He was usually very contented being driven around in his Motabiity car. William was always a big strong unpredictable man and so whenever out in the community two carers were required for his own and the safety of others.

Any changes to daily routines would really distress William. From a young age until he died aged 68 years he always liked to have his comforter with him – something dangling on a piece of string or a small toy rubber animal with a tail to twiddle.

Whenever I visited he always put out his hand to take mine and lay my palm on his cheek. It was his way of showing he was pleased to see me. He would also take me to the front door to show me he wanted to go out in the car.

Caring for William and understanding his needs was always a challenge. However when he was settled and happy he was described as “a gentle lamb” and he endeared himself to the staff. His infectious giggles could brighten up the day for those with him.

William will be remembered as a unique person, loved by God, and who when contented rewarded those with him with an inscrutable stare and if you were lucky a big grin.

PS: William had a strong family history of heart disease and he died of a heart attack. His ashes were scattered in a beautiful crematorium garden along with those of his parents.

William’s cousin who is in his 70’s has two grandsons in their late teens who have quite severe autism. They are both receiving very good support. 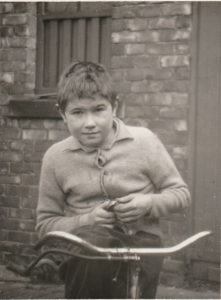 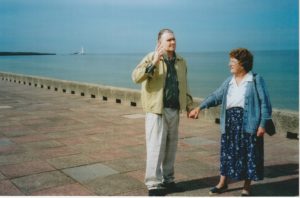