Maureen’s life, which began in 1961, ended abruptly, however seemingly peacefully, at the age of 54. She was the youngest of one sister and two brothers. Her life began with the typical symptoms of autism at the age of 1, possible even earlier…At introduction into therapy at the age of 3m it was determined by the professionals and psychiatrists, that she had “childhood schizophrenia”. One therapist described her as “a VERY INTERESTING child”. Indeed, schizophrenia may have been partially true too, as evidenced by her tantrums and aggressive behaviors, especially against animals, the elderly, and otherwise defenseless individuals. She also had a fascination with fire, which was exhibited several times. Her OCD behaviors began around 1 1/2 years and at age 3 she would hold a plastic spoon, break it, and then want another one repeatedly. Unfortunately, at the age of 10, these behaviors resulted in the psychiatrist’s recommendation that she be placed in an institution. After a year we brought her home as she was ill. At the age of 13 she was placed again for a year due to family moves and then later yet another hospital for 6 months at age 14. A few years later she was re-diagnosed with autism as the primary “axis”. And so began years of placements in several group homes, as I needed to work and was not able to be with her 24/7. In the days and periods when she could be home, we managed to provide her with as good as a life, vacations and exposures as possible. She attended workshops and seemed to enjoy them.

She loved her visits home, as they also provided her with more opportunities to enjoy her one love-tea…(caffeine)! Most of her life she was relatively manageable. Her personality, though never affectionate, was engaging, amusing, and surprising, which I, her family, staff, or even strangers enjoyed. In public she would prompt a smile in most people, and even an occasional “God bless you” would be directed towards me! She had an almost savant memory and attention to detail, as evidenced by some of her drawings. She remembered what she received on her first birthday. She claimed to remember when she was in the womb, described night as “dark” and day as “red”. She also remembered injuries sustained by her sister and brothers. She could read and spell at the age of 10 and compose simple letters, and do simple math as the years progressed. Most of the time she did not like to be touched, but would tolerate a hug-and even return one-because she was aware it was socially expected! On the other hand, throughout the last 40 years, she composed cards for family. And for me on every holiday and birthday, which she proudly expected to be displayed on my refrigerator, and always her signature “Love, Maureen” OXOXOX. She would also do crafts and pictures and designate which family member should be privileged to received it.

In the last 45+ years of her life she has been my main priority and concern. Her actions, movements, and words are with me still throughout the day. Her sister and brother likewise loved and grieved her loss as well. Others who knew her and cared for her affectionately called her “MoMo” and to her family and I she was “Maureenie”.

I am assured that she is finally really happy- and whole-with Jesus. Still, though, I would love to have her with me now, just a little longer, in THIS life. So many more questions I would ask of her impeccable memory…My remorse is softened only by the fact that her future life-and death-could have been much worse. I was once told when she was a youngster, that she was a saint, and since then I have always felt that I have been privileged to love, care for, live with and enjoy–our special angel. 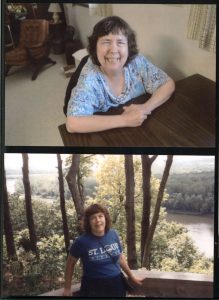