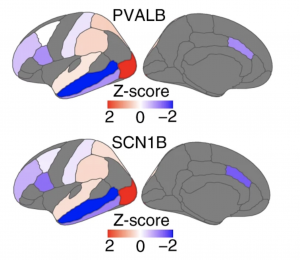 PVALB and SCN1B spatial distribution. A comparison between the genes correlated with rs-fMRI in individuals without ASD in the current study and genes correlated with rs-fMRI measurements in previous studies revealed an overlap of six genes. Of these, two genes, SCN1B and PVALB, also showed differential correlations between individuals with and without ASD, suggesting a role of these genes in regulating brain circuits affected in ASD. Both genes have a rostro-caudal pattern of expression, with higher expression in the occipital regions. Image adapted from Berto S. et al. Nature Commun. 13, 3328.

The new study, led by Genevieve Konopka, examined gene expression (RNA sequencing) in 11 brain regions from a large number of donors with an ASD diagnosis and a group of typically developing individuals for comparison. Postmortem brain tissue was partly obtained from Autism BrainNet. In the same brain regions where they measured gene expression, the researchers obtained measures of brain activity for participants with ASD and those who are typically developing from a large functional magnetic resonance imaging (fMRI) dataset, which is part of the Autism Brain Imaging Data Exchange.

The researchers first identified gene activity in 11 brain regions that correlate with the fMRI measurements. Next, they discovered that this correlation between gene expression and functional brain activity is altered in the brains of individuals with ASD. Changes were found, especially in a subset of genes that are important for brain development, including SCN1B and PVALB. This finding suggested that gene expression patterns that typically support functional brain activity in neurotypical individuals might be altered in ASD.

In taking a closer look at these gene groups across development, the researchers also found that in ASD, the genes highly expressed in early development were found in excitatory neurons, whereas the genes highly expressed in adulthood were found in inhibitory (parvalbumin) interneurons that regulate brain excitatory/inhibitory balance which is thought to be disrupted in ASD (Ferguson and Gao, Front. Neural Circuits, 2018).