The brain of autistic individuals may present gene activity changes associated with cancer, a new study claims.1 Previous studies have highlighted a potential link between autism spectrum disorder (ASD) and cancer biology by showing that many autism risk genes are implicated in cancer-related processes2,3 and that individuals with ASD may present both higher and lower cancer rates compared to those without the disorder.4,5,6 However, the mechanisms underlying an intersection between ASD and cancer remain unclear.

The new study, which was led by Jaume Forés-Martos of the Biomedical Research Networking Center of Mental Health (CIBERSAM) in Madrid, Spain, compared gene activity in postmortem brain tissue from donors with ASD and cancer specimens to find gene expression changes that may be jointly affected in the two conditions.

The data was gathered from the scientific literature and included three previously published studies of gene expression in ASD postmortem brains, many of which had been acquired through Autism BrainNet,7,8,9 and 198 published gene expression data sets comprising 22 different cancer types. 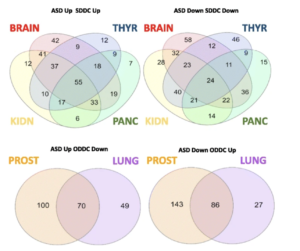 The results, which appeared in Molecular Autism earlier this year, showed that ASD and four types of cancer (brain, kidney, pancreatic and thyroid cancer) shared similar patterns of increased or decreased activity in 100-200 genes. Moreover, the investigators found that genes with increased activity in ASD brain tissue had lower activity in lung and prostate cancer and vice versa (Figure 1).

These findings indicate that ASD and cancer may share some same- and opposite-direction changes in gene activity, which may partially explain why epidemiological studies described either a direct (increased rate) or inverse (lower rate) comorbidity of cancer in individuals with ASD. Genes with changes in the same direction (increased or decreased in both ASD and cancer) regulated functions of the immune system and neuronal and synaptic processes.

The take-home message in this study is that ASD and cancer risk may intersect in various ways at the molecular level and that links between ASD and cancer biology may be found in cancers both in neural (i.e., brain) and non-neural (e.g., kidney) tissues. Gaining a better understanding of the biological pathways shared by these two conditions may have important therapeutic implications for ASD, as existing cancer drugs that target mechanisms also linked to ASD could conceivably be repurposed for ASD treatment where safety allows.

Further studies will be needed to replicate these results and to learn more about the association between ASD comorbidity with cancer. Most importantly, studying a larger number of brains would make it possible to stratify ASD cases (e.g., by genetic diagnosis) and find which, if any, subtypes of autism are more or less likely to be associated with cancer risk and, potentially, with which type of cancer.