RNA-editing is dysregulated in the brains of individuals with autism

Researchers at the University of California, Los Angeles, found that RNA-editing is dysregulated in the brains of individuals with autism spectrum disorder (ASD)1. RNA-editing is a mechanism that occurs inside the cells, whereby the cell’s RNA sequence can be altered, thus changing the information used to build proteins. This process is known to play a role in brain development and regulates the normal function of brain cells throughout life. Changes in RNA-editing have also been previously observed in a variety of other disorders, including neuropsychiatric and neurological conditions2,3. 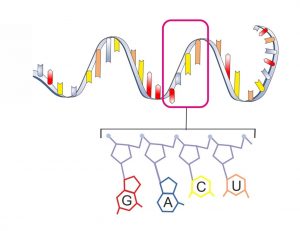 Stephen Tran, Daniel Geschwind, Xinshu Xiao, and their collaborators wanted to know if RNA-editing may also be implicated in ASD. To answer this question, they examined RNA-editing in sixty-nine post-mortem brains from individuals with and without ASD. These brain samples, which were acquired through the University of Maryland Brain and Tissue Bank, a component of the NIH NeuroBioBank, comprised tissue from several regions of the brain that have been shown to be implicated in the disorder.

This was an important step forward, as a previous study that examined RNA-editing in ASD only focused on a single structure of the brain, thus limiting the possibility to draw conclusions on the impact of this mechanism on a more global level4.

The researchers found that the brains of individuals with autism showed less RNA-editing than the brains of individuals without autism. Interestingly, the authors also reported that differences in RNA-editing were mostly observed in genes that are implicated in the transmission of signals between neurons. This finding is consistent with independent studies indicating that neuronal communication is altered in ASD.

Having established that the process of RNA-editing is altered in ASD, the authors also wanted to understand better the mechanisms leading to this alteration.

They found that RNA-editing was directly affected by the activity of two genes (FMR1 and FXR1) implicated in fragile X syndrome, a disorder closely linked to autism. In fact, the authors claimed that both ASD and fragile X syndrome shared alterations in RNA-editing, which suggested the possibility of similar molecular mechanisms leading to these two disorders.

The final question Tran and collaborators asked was: how does RNA-editing, a molecular process occurring inside single cells, affect the complex behavior of individuals with ASD? The researchers correlated levels of RNA-editing with the measures of intelligence quotient available for the brain samples examined. In particular, they looked at a subgroup of individuals for whom a genetic diagnosis (i.e., a duplication of the chromosome 15q11.2-q13.1) was known. Often referred to as dup15, individuals carrying this genetic change typically have more severe symptoms than individuals with ASD without a genetic diagnosis.

Tran and his colleagues found that ASD-dup15 individuals had even less RNA-editing than ASD individuals without an associated genetic diagnosis. Moreover, they suggested a relationship between the severity of RNA-editing and intelligence quotient, so that less RNA-editing correlated with lower IQ. Because the data used to conduct these analyses was available only from a small set of individuals, however, further research is needed to confirm the preliminary, yet intriguing, finding that changes in RNA-editing may be related to difficulties in cognitive functions in ASD.