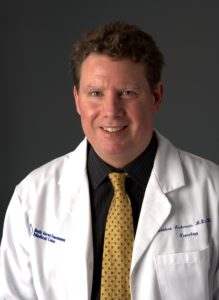 Autism BrainNet relies on the teamwork of many clinical and research staff to acquire and distribute the tissue provided by the donor families. This staff is located at four centers, or nodes, across the United States. We recently spoke with Matthew Anderson, M.D., Ph.D., who is chief of neuropathology at Beth Israel Deaconess Medical Center, associate professor at Harvard Medical School, director of the Boston Node and clinical neuropathologist for Autism BrainNet, to learn more about his research using postmortem brain tissue and his role with Autism BrainNet.

The interview has been edited for brevity and clarity.

By Serena Bianchi and Lilliam Acosta-Sanchez

I first became interested in autism research when a local donor approached my chairman of neurology, Dr. Clifford Saper, to begin research in this field. By that time, I was open to further research opportunities, and I also was looking for what was going to be my long-term focus of research. I had started working on epilepsy, which has some overlap with autism; during my Ph.D., I had studied cystic fibrosis, which is a childhood disorder. That motivated me. I found the grassroots involvement of families inspiring.

A colleague of mine, who was originally contacted by Autism BrainNet, suggested me as the contact person for the program at the Boston Node. I am one of only a few neuropathologists who study autism. I was excited about the opportunity to join Autism BrainNet because my clinical career focuses heavily on diseases of the human brain.

My clinical work entails handling human brains, whether it’s to conduct brain biopsies in living patients (e.g., to diagnose tumors, neurodegenerative disorders, infectious processes) or to diagnose brain diseases in autopsy postmortem cases. I provide neuropathology reports for medical examiners and help other pathologists and clinicians to figure out the cause of death and also to understand what was happening during the life of an individual. With Autism BrainNet, I’m serving as the clinical neuropathologist.

You recently published a new study1 that examined the postmortem brain of autistic individuals. What motivated this study, and what did you find?

Researchers had previously found evidence of an inflammatory state in postmortem brain tissue from donors with autism2. They showed that transcripts encoding the molecules that mediate the innate immune system’s response were elevated in a large proportion of autism cases3,4. To me, that meant that there is a tissue pathology of autism — we just had to find it. I was carrying that knowledge and information with me as I was looking through the microscope at the brains donated to Autism BrainNet, and I noted something surprising: many brains from individuals with autism had scattered clusters of lymphocytes, a type of immune blood cell that helps fight viral infections. These lymphocytic cuffs are usually rare in the brain. In fact, I had seen them previously only in conditions such as encephalitis and multiple sclerosis. And then, there were other things that I kept seeing, and I said: What is that? There were these little bubbles or ‘blebs,’ in a compartment around the blood vessels that contains the cerebral spinal fluid.

Where did these ‘blebs’ come from, and what’s their relationship with the excess of lymphocytes you found in the autism brains?

These blebs were originating from a type of brain cell called ‘astrocytes,’ and in particular, from those that form the barrier that seals off the brain from the cerebral spinal fluid and the blood vessels — you could see them ‘bubbling off’ of the astrocytic processes.

If a lymphocyte wants to get into the brain, it has to break that barrier open. This is important because inflammatory states in the brain often activate astrocytes. So this really made me think that we needed to further characterize the type of lymphocytes we were seeing in the autism brains. We found that those were predominantly a cytotoxic ‘killer’ CD8 type of T-cell, which is the same culprit that kills the insulin-secreting islets cells in type 1 diabetes and that attacks muscle cells in polymyositis and also causes the damage in other T-cell based autoimmune disorders.

In other words, we saw evidence that the T-cells were attacking the astrocytes, particularly at this barrier, called the ‘glia limitans,’ where the astrocyte processes touch the cerebral spinal fluid. Blebs were forming from the astrocyte, a cellular response seen when killer T-cells attack cancer cells.

What caused the inflammatory response in the autism brains?

Causality is a tricky thing to establish. I’ve somewhat based it upon an analogy to other disorders that have been known for quite some time and have been studied extensively. This is what leads me to say that this could be a T-cells-based autoimmune disorder. What’s important is that at least we now have a framework on which to design a series of studies. This is exciting; we see something in the brain that may explain what was going on in life in ASD, like Lewy bodies in Parkinson’s disease and plaques and tangles in Alzheimer’s disease. I feel that in addition to the molecular signatures of inflammation, we now have a pathologic entity in the autism brain that we can study further.

What are the implications of these findings for autistic individuals?

One implication is that we may be able to develop a blood test that would reflect this brain pathology. The cerebral spinal fluid ultimately drains into the bloodstream, and it is possible to find the markers we found in the blebs in the blood of individuals with autism. We want a blood marker of a released substance that we can monitor for the activity of these bleb lesions and to potentially relate the quantity to the severity of some of the symptoms. We have to remember that autism is defined by behavior. If we were defining autism by markers in the blood plus behavior, it might subdivide these cases, including maybe an inflammatory subtype.

Another implication — and this is for the brain banking program and postmortem tissue research — is that these lesions we found may become a focal point [of research]. The brain is this massive chunk of tissue, and we could choose almost any part of it to investigate. Our research may help to narrow the focus.

What are the next steps?

T-cells typically react to a specific protein in autoimmune disorders. So one of the next breakthroughs will be to identify what the T-cells are attacking in the autism brain that might be specifically at that glia limitans.

The other thing is that we should take the genetics of autism and align it to the changes we found in the brain tissue and ask: Are there hints of this pathology in the genetics? In the study, we examined a few cases with known genetic changes. There was a case with mutations in the PTEN gene, which had the lymphocytes; that is interesting since autoimmunity is increased with PTEN haploid insufficiency. Another case with elevated lymphocytes had an extra male-specific Y chromosome.

Why is it important to conduct studies of the postmortem human brain to advance autism research?

There are multiple approaches to autism research: genetics studies that identify landmark molecules implicated in the disorder, behavioral studies and animal models. They are all very important but have limitations because they are not the disorder process itself. So to see the actual disorder, you need the organ that experiences that disorder. Otherwise, it would be like treating inflammatory muscle disease without knowing what is happening to the muscles. There would be no target to treat. So, the actual human brain that has been experiencing changes linked to autism is the only source of the actual process — that’s why we have to understand it in detail.

What has been the most rewarding part of your collaboration with Autism BrainNet so far?

Number one is the camaraderie of the program. We all have a common goal, and I enjoy working with the other members of the team. Because I handle brains all the time, for me, it’s a way to give back and to help the field. It’s just a natural thing for me to do and a missing piece in the autism research.

How do you see the future of autism research, especially of research that uses postmortem brain tissue?

We’re coming on a renaissance of research using human tissue, in my view. There are new technologies, and scientists are developing new methods to study particular brain cells. I think in the past, we’ve walked away from tissue-based research, thinking that we already know what’s really going on. But, in fact, I think we still miss many pieces of the puzzle. Now we have new lenses with which to look at the tissue. I think with postmortem tissue, we have an opportunity to bridge across research on genetics and behavior.

And we certainly can’t forget that we do this work thanks to the donor families. We are very grateful to them.